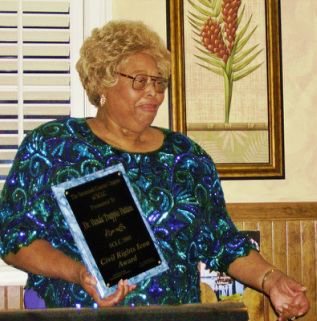 Human rights advocate Vanda Trappio Patton
An instinct for taking care of those unable to take care of themselves, a passion for helping to correct social and political injustice in the world, and a deep devotion to serving humanity based on those spiritual principles taught by Jesus Christ have defined the work and character of Vanda Lee Trappio Patton throughout her life.

“Sister Patton,” as many friends and associates called her, was born Vannie Lee Clark in 1938 in the city of Girard, Burke County, Georgia. After a life filled with many achievements and honors, she died April 6, 2018, in Savannah.

Like many progressive-minded African Americans growing up during the late 1950s, Clark believed deeply in education as the key to her own and her people’s advancement. However, she cut short her pursuit of a nursing degree in 1960 when she married the widower and longshoreman Moses Trappio Jr. at the age of 21 and instantly became a mother to seven sons and one daughter. Her maternal nature was not restricted to just her family. Over the years, many came to know her as one of the trusted mainstays within their community and fondly addressed her as “Mom” while looking to her as a source of guiding wisdom and inspiration.

In the early 1960s, she joined the National Association for the Advancement of Colored People (NAACP) and the historic Crusade for Voters to protest the racial segregation that was then common in the United States. As with Martin Luther King, Jr., and many others, her activities led to her arrest and to abusive treatment at the hands of police. She did not let this discourage her from struggling for racial justice and continued throughout her life to provide support for organizations dedicated to ensuring human rights for all.

She received numerous awards for her contributions to the Civil Rights Movement, including the Award for Valor and Courage presented by the Southern Christian Leadership Conference (1964) and the Civil Rights Icon Award (2009). In addition, the Telfair Museum of Art in 2009 presented her with a Certificate of Recognition for "extraordinary contributions to the cause of civil rights in Savannah, Georgia," bestowed “In conjunction with the exhibition Freedom's March."

During the same period that Patton began working within the Civil Rights Movement, she also began a long and illustrious affiliation with some of the most influential fraternal organizations in American and world society, including the Prince Hall Affiliate known as the Order of the Eastern Star. She initially joined the order of the Golden Circle around 1964. During her nearly half a century of participation within various branches of the social organizations, she served both as a charter member for a number of courts and in the capacity of a leader for different divisions. These positions have included: the Grand Most Ancient Matron of the Wilhelmina H. Parrish Most Ancient Grand Court Heroines of Jericho, Jurisdiction of Georgia and the Bahamas, Prince Hall Affiliation; and, her June 30, 2011 appointment as the First International Grand Deputy in the jurisdiction of Georgia, International Grand Court of Cyrene Crusaders.

She garnered many awards in recognition of her lifelong dedication, among them: the Award for Dedicated and Loyal Services presented by Eastern Stars District No. 1 Jurisdiction of Georgia (1991-2000), and the 2011 Humanitarian Service Award presented by the Most Excellent Grand Chapter H.R.A.M. Georgia Jurisdiction and W.J. Robinson, Sr., MEGHP. Perhaps most importantly, her work within these various roles contributed significantly to the provision of scholarship awards for at-risk students from financially-challenged backgrounds.

Following the dissolution of her first marriage, Vanda married retired Air Force Sergeant and former Georgia Ports employee George F. Patton on April 22, 1983. Among other organizations, Mr. Patton was a member of the Knights Temple and the Prince Hall Chapter No. 28. The couple shared a mutual devotion to socially progressive organizations and together contributed a great deal of time, energy, and resources to maintaining their historical legacies and advancing their humanitarian goals.  Although George Patton passed away in 2005, his spirit of service and fraternity lives on through the Ladies of the Circle of Perfection organization his widow established in 2008.

Vanda Patton’s commitment to community, social justice, and the spiritual values exemplified by the life of Christ continue to not only inspire, but to empower younger generations.

Create your own unique website with customizable templates.
Daughters of Faith and Grace